Pancakes are a weekend staple at our house. There is something wonderful about having pancakes for a lazy weekend morning brunch. We generally stick with the old reliable Bisquick recipe on the back of the box. 2 cups Bisquick, 2 eggs, 1 cup milk. I usually then thin the mixture with a little water because they cook more evenly and taste a little lighter.

Recently, I was thinking about how to make these pancakes a little healthier. I came across this recipe for whole wheat pancakes and decided to give it a try. We have a ton of whole wheat flour to use up. I added 1/3 cup of Greek yogurt to the batter, since we had some we needed to use and the manufacturer’s recipe called for either butter or oil to make the whole wheat more delicious.

As you might guess, whole wheat pancakes are a little denser and thicker than pancakes made with Bisquick. But they were close enough for my children to eat them, which I consider a huge victory! Sadly, I didn’t taste them because I am still on my diet but my husband indicated that they were good but dense. He says eating a Bisquick pancake is like eating cake. The whole wheat pancakes were a little more substantial and strong-tasting and might be better with jam or berries.

I asked him if it came down to a nutritional choice between eating 1 Bisquick pancake or 2 whole wheat pancakes which would he prefer and he said that hands down, he would go for two whole wheat ones because more pancakes is always better.

We have all been drilled to eat whole wheat whenever possible but when you start looking at it from a calorie perspective the advice becomes a little less clear. Both whole wheat flour and white flour have a lot of calories. 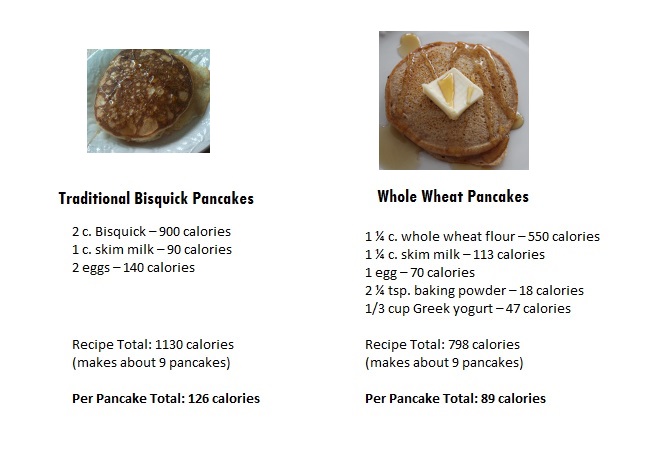 With a difference of just 37 calories per pancake, you might think, “So what!” But if you usually eat more than one pancake (and who doesn’t?) then the difference starts to add up. If you eat a stack of 3, for example, you saved almost 100 calories with the whole wheat.

Now, here is where it gets complicated. Suppose you took the low-fat recipe that uses less flour in general and used Bisquick instead of whole wheat flour. The Bisquick is only 563 calories where the whole wheat flour is 550. It’s almost a negligible difference.

So what is the advantage of whole wheat? 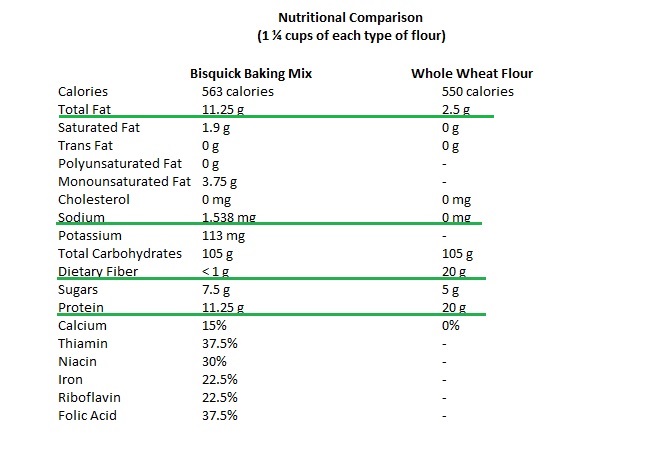 The whole wheat flour is superior in several key areas: lower fat, lower sodium, higher in dietary fiber, lower in sugar, higher in protein. The Bisquick is fortified in various vitamins and minerals, however. I suppose the nutritional wisdom is probably that although pancakes are not the healthiest breakfast choice, if you are going to eat them, then you might as well maximize your nutritional intake.

WebMD gives 11 reasons to make the switch to whole grains and calls it “one of the most important things you can do for your health.”

I am still not sure I completely understand the difference between whole wheat and white flour products but fortunately I enjoy whole wheat so it’s just fine with me to eat that instead. I generally buy whole wheat pastas exclusively as well as whole wheat bread. My children eat it just fine too.

Where do you come down on the whole grain spectrum? Are there foods you must have with white flour? Please share in the comments.

P.S. Now I just have to learn which pancake toppings are OK. After thinking we were doing so well switching to agave syrup, I just learned that agave may be worse for you than sugar because it contains a higher fructose content. Eeesh! So much to learn in this area.