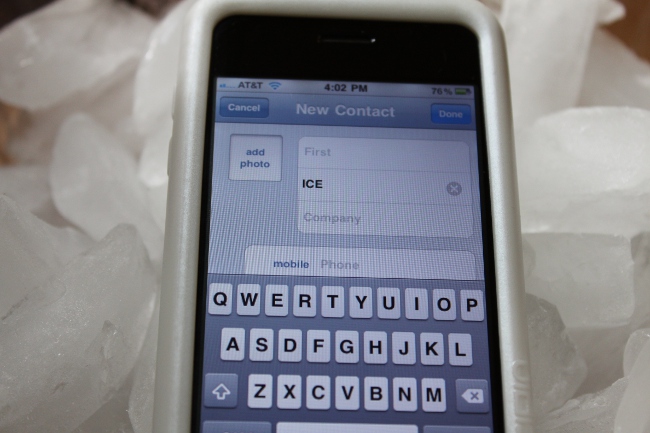 Today’s tip is an old one but a good one.  Add to your cell phone contacts an entry called “ICE” which stands for “In Case of Emergency.”  Add in the number you want someone to call if (heaven forbid) someone discovers your unconscious body and wants to notify your loved ones.   It’s like having a really short emergency contact list . . . on speed-dial.

In my own phone, I have two ICE entries.

I figure my rescuer would like some context as to who they are speaking with.

The legend is that ICE-ing cell phones was a technique recommended by a 9/11 rescuer who kept finding cell phones on victims but had no idea who to call to notify about the situation.

There is only one downside I have found when you ICE your cell phone.  If you have your ICE contact in the phone twice, once as the ICE contact and again by first and last name, then the phone can get a little confused.  When my husband calls me on my cell phone, for example, it generally says, “[Name] or 1 other calling” but it can also say “ICE or 1 other calling.”  Still, at least I know who is calling!

Since a cell phone is an item most people routinely carry around all the time, it is a great spot to institute a little emergency preparedness and it takes just a second to do.