Apologies for the posting delay, but my nerves are in a much better state today and ready to continue our discussion of school organization strategies. 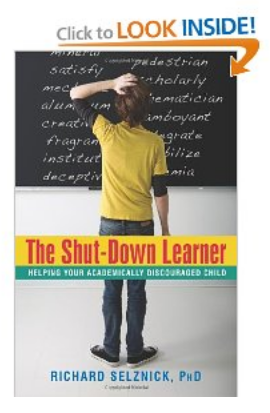 Today’s book review continues the exploration of why some children seem to be particularly challenged by school and what frustrated parents can do to help their children succeed academically. Psychologist Richard Selznick, Ph.D.’s book The Shut-Down Learner: Helping your Academically Discouraged Child argues that many of the children parents and teachers write off simplistically as “unmotivated,” “not trying hard enough” or “ADD” are actually suffering from a variety of learning challenges. One of the primary challenges for these learners is that their brains tend to be wired to be exceptionally strong with spatial and visual perception but far weaker in language skills. While many of these learners tend to be boys, girls are also affected.

“I also refer to these kids as Lego kids. Lego play is the perfect medium for the child who is being described. . . . In the conference setting, one parent after another will tell me that their kid loved to play with Lego bricks when they were younger. . . . A typical dialogue goes like this. . .

‘When he was five he built these really complex designs from his mind. He was so creative. I thought he was a genius. What happened? How could he go from doing something so well to failing in school?’

What happened is the curriculum got in the way. The child was thriving when he was in a classroom that tapped into his strengths. As the curriculum shifted in the first grade to more language-based activities, the decline in confidence and performance started.

Shut-Down Learners also tend to be very strong with computers and hooking up various electronic systems. They tend to avoid tasks like reading and “find writing deadly.”

“It is my impression that many of the kids considered ADD or ADHD have difficulty, albeit subtle, with the processing of complex verbal and written language. While they may look severely inattentive, often their inattention is largely a functional weakness from taking in too much language and information that they do not understand readily. Their circuits become overloaded and shut down.”

Dr. Selznick points out the many good attributes of Shut-Down Learners, however. They can be very intelligent, creative children and may be demonstrating this in various ways that are not appreciated by the school system. For example:

“I recently assessed Brian, a twelve-year-old boy who struggled in school. His teachers saw him as disconnected, uninterested and unmotivated. Yet his mother said he spent much of his weekend at the nearby pond collecting animal and plant life for elaborate terrariums that he set up in his garage. The terrariums were incredibly sophisticated, showing creativity and a real depth of understanding, yet the same kid was getting a D in science.”

Dr. Selznick’s book goes into detail about the specific language problems shut-down learners are facing and what to do about them. Some of his recommendations include individualized interventions by a “learning therapist,” reinvigorating a system of vocational education in our schools and finding ways within the school system and within the family to forge positive emotional connections that support self-esteem and emphasize what the child does well.

On the latter point, I was most impressed when I first started reading this book with Dr. Selznick’s dedication.

“This book is dedicated to the memory of my father, Mel Selznick, who would never let a child shut down on his watch.

Reminding me that it ‘is often the intangibles that matter most with children.’ No one understood the art of developing a child’s self-esteem better than he did.”

With such a beautiful tribute, I knew Dr. Selznick must be a special person himself and the book proved this to be the case. Dr. Selznick, although not a Shut-Down Learner type himself, identifies with the Shut-Down Learner and appears to bridge the gap for these children. The last section of the book provides success stories from several children Dr. Selznick worked with, showing the promising careers shut-down learners can achieve with the right coaching and interventions.

I really enjoyed this book. It is particularly interesting if you know someone who is a high-spatial learner as you will see that person reflected in so many of the examples Dr. Selznick provides. This book should be required reading for all teachers and for any parent who believes their child could do better in school if he/she just “tried harder.”

Dr. Selznick was kind enough to answer some interview questions for Ruly, below:

Ruly: Many parents are first alerted their child has a problem with school by a teacher who recommends the child (usually a boy) be screened for ADHD. What advice would you give to a parent who has just received this recommendation?

Dr. Selznick: There is tremendous variation in the field in terms of the nature of assessments and “screening for ADHD” can mean many things depending upon whose professional doorstep. For me the most important early screening (that is often overlooked by the schools), is the one that would screen for whether the child is at risk for a reading/learning disability. Children who are at risk can be predicted and identified quite accurately in kindergarten and first grade. Most struggling children in the early years have trouble with the development of core skills – this leads to much off-task behavior.

Ruly: Aside from ADHD what other mental health conditions are commonly found in shut-down learners?

Dr. Selznick: I tend to think of the shut-down learner kids as predominantly a combination of reading/learning disability and ADHD as a general theme. Certainly, as the kids get older other emotional issues can become more pronounced, such as anxiety, anger/oppositional behavior and perhaps depression, as a result of the long term struggling.

Ruly: In the book you mention several times that a shut-down learner simply cannot perform at a high level on language-related tasks no matter the effort put forth. This is likely to be discouraging news for parents and kids. Is the situation really that hopeless?

Dr. Selznick: I hope I wasn’t that negative. I certainly don’t think that way when I am assessing and interacting with the kids and their family. Mine is not a deficit-based approach. I am trying to emphasize that these kids do have wonderful strengths. (See the “Million Dollar Challenge” in terms of the approach and mindset.) I try and have kids walk out of the center after they’ve been assessed feeling pretty good about themselves. Verbal skills and language abilities are very responsive to good remediation. Vocabulary, for example, is one of the best skills to target. I emphasize the language based issues in the book, because they are at the core of the kid’s struggling and the parents need to understand it so they can target it more specifically. Also note the section on comprehension. Teaching comprehension is teaching language, by and large.

Ruly: When I read the list of high-spatial characteristics to my husband, he said they sounded like “geek” interests. I find it troubling to know that our school system may be discouraging large numbers of our future scientists and engineers. If the school system were to change to adapt to shut-down learners, what types of changes would occur? Would we see a return to gender-segregated classes since shut-down learners tend to be boys more than girls?

Dr. Selznick: So exciting to let you know that a school in South Jersey has made curriculum change specifically inspired by the Shut Down Learner. It’s a bit too detailed to get into for the moment, but go on my website www.shutdownlearner.com and check out the blog from a couple months back on the Logan School. I think the blog is called “The Game Changer.”

Many thanks to Dr. Selznick for his interview responses and his wonderful book! Since reading this book, it has changed my perspective dramatically and I believe that more schools need to take a look at the Shut-Down Learner concerns and implement change.

Now that I am aware of the issue, I am seeing references to the Shut-Down Learner problem in many different areas. For example, Don Peck’s interesting article in The Atlantic Monthly, “Can the Middle Class Be Saved?” mirrors a lot of Dr. Selznick’s observations and recommendations.

“One of the great puzzles of the past 30 years has been the way that men, as a group, have responded to the declining market for blue-collar jobs. Opportunities have expanded for college graduates over that span, and for nongraduates, jobs have proliferated within the service sector (at wages ranging from rock-bottom to middling). Yet in the main, men have pursued neither higher education nor service jobs. The proportion of young men with a bachelor’s degree today is about the same as it was in 1980. And as the sociologists Maria Charles and David Grusky noted in their 2004 book, Occupational Ghettos, while men and women now mix more easily on different rungs of the career ladder, many industries and occupations have remained astonishingly segregated, with men continuing to seek work in a dwindling number of manual jobs, and women “crowding into nonmanual occupations that, on average, confer more pay and prestige. . . .

As we continue to push for better K–12 schooling and wider college access, we also need to build more paths into the middle class that do not depend on a four-year college degree. One promising approach, as noted by Haskins and Sawhill, is the development of ‘career academies’—schools of 100 to 150 students, within larger high schools, offering a curriculum that mixes academic coursework with hands-on technical courses designed to build work skills.”

–Don Peck, “Can the Middle Class Be Saved?” The Atlantic Monthly, September 2011.

Also, the PBS documentary, Between the Folds, offered fascinating insight into the visual-spatial mind. You can’t get much more visual-spatial than origami. The documentary interviewed numerous origami artists all over the world (all men), many of whom were also scientists or engineers at prestigious universities. Interestingly, while these men began their fascination with origami as children and just liked to do it for fun, some eventually merged their pastime with their professional interests and found uses for origami in product packaging, pharmaceutical research and other areas.

In a curious twist on this subject, Anderson Cooper’s interview with Marshall Mathers (rapper Eminem) on 60 Minutes had a fascinating section (approximately 4:57 – 7:40) where Eminem discusses how he “bends words” to create unique rhymes, including a demonstration of numerous words he can think of that rhyme with “orange” and his filing system for his ideas. Despite Eminem’s obvious language abilities and his recreational dictionary reading, he also never did well in school and only completed the ninth grade.

Were you a shut-down learner in school? Do you know someone who fits this criteria? How do you feel about revamping our school systems to adjust to visual-spatial learners? Please share in the comments.