The Under-55 Planning Guide to Social Security and Medicare

As I wrote about at the beginning of the month, our family’s retirement planning is currently based on the assumption that Social Security will constitute little or nothing of our retirement income. For many people, even young people, this is a scary concept. It conjures fears of being poor, old, feeble and unable to work, living in a cardboard box or a homeless shelter. At a minimum, it makes people worry that rather than traveling to visit their grandchildren or enjoying leisure activities, old age will be spent clipping coupons, eating canned beans and otherwise living a miserably frugal existence.

But, it doesn’t have to be this stark. We have grown so accustomed to counting on the government (or pensions) for our retirement income that we have forgotten that many people do provide income from their own savings. With the recent economic turmoil, people have lost a lot of faith in their ability to save for their own retirement expenses or even to maintain a job and earn income. However, we have to face reality and know that for many people, and the future of the United States, this will be asked of us.

Current projections for Social Security put the system in full-blown crisis just a few years before my husband and I would retire. If nothing is done to fix the system, at a minimum, any expected Social Security payment we might receive would be cut by a minimum of 25%. Since Social Security is not that generous to begin with (approximately $1,177 per recipient per month currently), this would be a substantial drop (if it happened today, average payments would drop to $883 per month or less). In the event this disaster happened, we see it as quite likely that a progressive adjustment to Social Security payments would be made, such that poorer individuals would receive a full benefit and wealthier individuals could receive little or nothing. 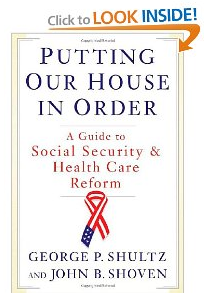 To learn more about what is likely to happen to Social Security and Medicare over time, I thought it would be interesting to review a book from my local library, Putting Our House in Order: A Guide to Social Security & Health Care Reform. This book was written in 2008 by George P. Schultz and John B. Shoven. What I found interesting about this book is that the authors were more closely affiliated with the Democratic party but that many of their recommendations sound strikingly similar to ideas currently being advanced by the Republican party in their “Roadmap for America’s Future.”

It appears that the great economists of our nation of every political view, don’t see Social Security and Medicare reform as a mystery. They know exactly what needs to happen, i.e. cut benefits and increase taxes, but the political will fails time and time again and the United States falls deeper into debt.

How did we get into this mess? Schultz and Shoven give us several key insights, including:

OK, so enough about problems, what were Schultz and Shoven’s recommended solutions?

For Social Security, a few options:

Option 1: The Social Security system stays exactly the same as it is now for those 55 and older. For those under 55, lower-income earners continue with the current wage-indexed system and wealthier earners switch to the price indexed system. The retirement age keeps increasing based on assessments of longevity. Essentially this amounts to a significant decrease in retirement benefits which may need to be supplemented by personal savings.

Option 2: The Social Security system stays exactly the same as it is now for those 55 and older. For those under 55, there is a flat benefit amount paid to everyone regardless of how much you earned or paid into the system over your lifetime. In addition, there is a mandatory 5% deferral of your income each year to a Personal Security Account similar to a 401(k). (2.5% of this contribution comes from you and 2.5% from your employer). This amounts to an additional 2.5% tax on each worker over their lifetime, in addition to the current rate of Social Security taxes.

With regard to Medicare/Medicaid/health insurance spending, Schultz and Shoven (in line with many other economists), recommend the following solution:

Medicare reform: For those under 55, instead of Medicare, the government makes payments to a Personal Health Account for you. Your payment is based on your age, your lifetime earnings and any medical conditions you have. You will receive less if you are healthy and more if you are sickly. Your payment is not tied to your income in retirement (but is tied to your lifetime earnings). So if you saved a lot of your money and are doing well in retirement you get the same benefit as someone who earned the same but spent all their money before retirement. If you are extraordinarily wealthy, you may get nothing.

You use the amount in the Personal Health Account to purchase an insurance policy on the private market and insure yourself. The Medicare program as we know it today is gradually phased out so that this is the only system. Tax exemptions for employer-provided health insurance are revoked with perhaps a new tax credit for individuals.

It was not entirely clear to me from the proposal, but it appeared that you could extend this concept so that rather than a system that started in retirement, this becomes the only type of health insurance system in America. Few employers would have to offer insurance and even the poor would have to use this type of system rather than rely on Medicaid. We all start purchasing our own insurance policies with government subsidies. If you are very ill and practically uninsurable, it is unclear what would happen to you. The authors argue that your government subsidy would be enough to allow you to qualify for at least some form of private insurance coverage.

Of course, we would have to increase taxes to pay for such a system and one proposal was to add a new Value-Added-Tax of about 2.5% on purchases to pay for this.

“Something will have to give, and it has to be either the benefit determination or the taxes. Nothing else will bring about solvency.”

–George P. Shultz and John B. Shoven, Putting Our House in Order

If you are under 55, it is practically guaranteed that Social Security and Medicare will not be as generous as they are today and that you will need to have your own savings to cover the difference. Whether the government ultimately turns to private, defined contribution accounts and whether this impact will be positive or negative remains to be seen. We have seen this same switch in the private sector already and it would not be surprising if the government follows suit. However, this change is not going to happen fast and is very politically unpopular.

For those of us with decades to retirement, however, we need to factor these possible changes into our planning now so that we are not unduly surprised right before retirement. We also need to be mindful that before we react negatively to any proposals to cut entitlement programs, we have to realize that the exact same proposals have been made for decades by economists of every political affiliation. As a nation, we keep failing to do anything about the problem and it is this failure to act that makes the problem grow worse each year. At some point, someone has to take the brave step forward to implement a solution.

Are you worried about Social Security or Medicare reform? What would you like to see happen? Please share in the comments.