Change is hard. Change under stress is harder. Change under disaster conditions is devastating. The horrible confluence of events in Japan–earthquake, tsunami, radiation leaks—are on everyone’s minds lately. For Americans, the empathy for the Japanese people as well as the horrifying realization that even a developed nation can be fully consumed by disaster in an instant is almost too much to contemplate. 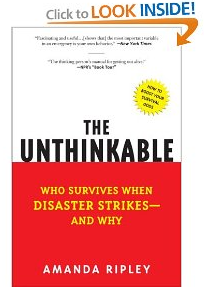 I had already planned to review a book discussing change in disaster circumstances, never expecting to have a real-time disaster to analyze it against. If you find yourself feeling a little detached from the horror of the disaster’s impact and the recovery efforts, Amanda Ripley’s The Unthinkable: Who Survives When Disaster Strikes—and Why helps to explain how most people process disaster situations and why change, or thinking of any kind, in these situations, is incredibly difficult.

In The Unthinkable, Amanda Ripley, a former senior writer for Time magazine, takes the reader through a series of chapters where firsthand accounts of disaster situations are interwoven with a discussion of emergency preparedness theory and practice. The reader walks down the emergency staircase of the North Tower with a 9/11 survivor, experiences the conflicting feelings victims of Hurricane Katrina, goes into the classroom with a survivor of the Virginia Tech shootings, and dives into the icy Potomac with a heroic rescuer bent on helping survivors from an airline crash into the Potomac River in 1982. Her storytelling is superb and her ability to extract fine details from the survivors paints a vivid picture of exactly what they thought was happening at the time.

From her research of both eyewitness accounts and emergency preparedness theory, we learn that most human beings are generally not all that good at disaster situations. We fall back on a lot of very primitive behaviors that may have been appropriate at some point in human history but are ill-suited for modern times.

First, it is hard for us to take any warnings or alarms seriously. Working against us is the “normalcy bias,” the tendency to think that everything is still OK because it always has been OK. This bias tells people, “It is OK to ignore that fire alarm or take my time getting out of the building because it has always been just a drill in the past.” “I don’t need to evacuate. I have survived a hurricane before.” Also working against us is peer pressure. We don’t want to look paranoid, alarmist or appear to be overreacting to our friends. Finally, working against us is that the alarms themselves often provide little valuable information.

“[T]he people in charge of warning us should treat us with respect. It’s surprising how rarely warnings explain why you should do something not just what you should do.”

Next, if we do heed the warning, we often do so in a lethargic way—stopping to gather supplies, turn off computers, and call friends or family. As I read this, I recalled the news story about a Japanese mother who stopped to get milk for her child instead of immediately evacuating and ended up tragically perishing in the tsunami.

We also are not so good at assessing threats, giving far more weight to threats created by humans than “old-fashioned risks like weather.” Notice how much the U.S. is worried about nuclear meltdowns and how little we are worrying about earthquake and tsunami preparedness for example.

Of course, sometimes we would be lucky to respond even in a lethargic way to a disaster. Our bodies can start to shut down under extreme stress, affecting our ability to reason or solve problems, causing temporary blindness or hearing “loss” or resulting in the loss of control of bodily functions. In especially dire situations where danger is clear and present, people often completely freeze up and do nothing or literally lay down and die waiting for the worst to happen. Movie stereotypes about people panicking, moving about and doing anything to cling to life it turns out are inaccurate. Many times, people just give up. They typically only snap out of this state when they remember their children or loved ones and they feel the need to survive.

“Paralysis seems to happen on the steepest slope of the survival arc—where almost all hope is lost, when escape seems impossible, and when the situation is unfamiliar to the extreme.”

When dealing with people who have either frozen or are prone to panicking in an emergency, often the most effective way to get people to snap out of this mindset and get them to do an effective and appropriate action is to yell, scream and be otherwise rude and insensitive to them! This is obviously counterintuitive to most of us. Ripley provides us with this vivid example:

“[M]embers of the Kansas City Fire Department rescue squad yell profanity-laced threats at [drowning] victims before they get to them. If they don’t, the victim will grab onto them and push them under the water in a mad scramble to stay afloat . . . [As one fire chief explains], ‘[I]f I approach Mrs. Suburban Housewife and say, ‘When I get to you, do not f***in touch me! I will leave you if you touch me! She tends to listen.”

Many airline flight attendants, for example, are trained to yell at you to jump down the inflatable slide quickly during a plane evacuation. Otherwise, too many people pause at the top of the slide for far too long, hindering the rescue effort of those behind them.

Our disaster response can also strongly be influenced by the crowds around us. Interestingly, we tend to behave ourselves in disaster crowds, helping others where we can. When I first read a story in The Washington Post (which strangely seems to have been removed from their website) about how kind the Japanese were to each other at disaster recovery camps, including remembering to recycle their garbage, I thought to myself, “That would never happen in D.C.” But it turns out that it probably would, here or anywhere! Ripley wrote about this in a recent blog post.

Is anyone naturally good in a disaster situation? It turns out yes. Ripley reports that one researcher, Paul Slovic, discovered that approximately 30% of men and, for unknown reasons, predominantly white men, “see very little risk in most threats.” Who are these men?

“They had a few subtle things in common. ‘They liked the world of status, hierarchy and power,’ says Slovic. They believed in technology.”

Additional studies on Special Forces soldiers showed that these men are chemically different as well. They produce high quantities of “’neuropeptide Y,’ a compound that helps you stay focused on a task under stress, among other things.” Psychiatrist Charles Morgan III found that he could identify which of a group of soldiers were members of Special Forces units just by looking at their blood. Further, Special Forces soldiers almost never “dissociated” from an emergency or stressful situation, such as reporting that things seemed to move in slow motion or seemed like a dream. Morgan developed a simple test that predicted with 95% accuracy whether someone would make it through the U.S. Army Survival School based just on their answers to his dissociation quiz.

If you found yourself watching the footage of the Japanese tsunami on television thinking it seemed unreal, like the waves were washing over some sort of dollhouse landscape and not the homes of real people, welcome to the dissociation crowd. Survivors reported dissociation as well:

“Akiko Sato, 50, fought to persuade her aged parents to evacuate, but they would not. As she packed a bag in her own Nobiru home, just steps away, she looked out the window. “I couldn’t believe what I saw,” she said. “It looked like almost hundreds of thousands of horses running towards me, like a computer simulation game.”

The heroes of many disaster situations–those who put their own lives in danger in order to help others–also end up being predominantly male or as one researcher described them, “male, single, childless and young.” Ripley does a wonderful account of the psychology of the hero, concluding:

For those of us who are not naturally good at disaster situations, it does not mean all hope is lost. Ripley argues passionately that all of us can become better at disaster preparedness through training and makes a fervent call to all of us to rethink our role in a disaster. Often the only advice we are given about emergencies is to sit and wait for help yet often this advice is unhelpful for survival. Educating ourselves about disaster situations and developing the preparedness tools mentally and physically to deal with these situations is the best option.

“These days we tend to think of disasters as acts of God and government. Regular people only feature into the equation as victims, which is a shame. Because regular people are the most important people at a disaster scene, every time.”

“All across the nation, we have snapped plates of armor onto our professional lifesavers . . . only after everything goes wrong do we realize we’re on our own.”

In a positive example of the power of training, Ripley reports that 100% of the residents of the city of Langi on the island of Simaeulue survived the Asian tsunami of 2004, despite having only 8 minutes from earthquake to tsunami. How? In 1907, a tsunami killed approximately 70% of the population of the island. Cultural memory never forgot this tragedy and generations of people were trained that as soon as the ground starts shaking you run to higher ground. Amazingly, almost 100 years later, the lesson stuck.

“Resilience is a precious skill. People who have it tend to also have three underlying advantages: a believe that they can influence life events; a tendency to find meaningful purpose in life’s turmoil; and a conviction that they can learn from both positive and negative experiences.”

I hope that Ripley’s words have given you a new framework to evaluate the information you see about Japan’s disaster recovery, to find hope in the despair and to further your own disaster preparedness. As we hope and pray for Japan’s recovery and future, I find comfort in one of the first quotes Ripley cites in the book from St. Augustine:

“This awful catastrophe is not the end but the beginning. History does not end so. It is the way its chapters open.”

Please share in the comments your reflections on Ripley’s ideas or your thoughts on the situation in Japan.