Riding the Elephant: Switch by Chip Heath and Dan Heath 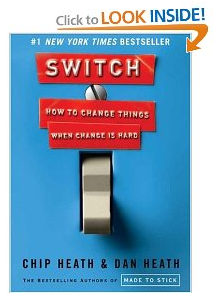 Imagine you are trying to get to a destination and the only way to get there is by elephant!  There you are, sitting atop the elephant, headed down a path.  What will influence your progress?  According to Chip and Dan Heath, authors of Switch: How to Change Things When Change is Hard, there are three main variables:

1)   The Rider: i.e. your logical/analytical brain.  Do you know where you want to go and how to get there?

2)   The Elephant: i.e. your emotional brain.  Are you excited about going there? Can you summon up the stamina to make it to the end of the journey?

3)   The Path: i.e. the external situation factors.  Is the path steep, flat or downhill?  Will you be deterred by weather or other hazards en route? Can you take a different route that makes the journey easier or the wrong path harder to pursue?

Switch is kind of a treatise on the current status of psychological research with regard to change and motivation.  The authors have cleverly organized an enormous amount of information around the elephant metaphor above and added in numerous real-world examples of change at work in personal lives, in business and in the non-profit world.

Similar to the Ruly philosophy, the Heath brothers believe that there is one process for successful change and that mastering that process will lead to success in any context, whether personal, business or philanthropic.

Some of the great psychological theories discussed include:

1)   solutions-focused therapy – This is a technique developed by the husband-wife therapist team Steve de Shazer and Insoo Kim Berg in their marital counseling practice who asked couples to imagine that overnight all of their marital problems were solved.  She then asks them to identify what visible signs would be evident the next morning to indicate the change had occurred.  Identifying and recognizing these signs is critical to identifying the progressive changes that need to occur.  This type of therapy essentially disregards the reasons why someone got to their current state of problems and makes the person focus on the way forward.

2)   identity theory – This theory, developed by psychologists Jonathan Freedman and Scott Fraser, shows that shifts in your identity result in behavioral changes. (Example: If you identify as an environmentalist, you might be inspired to recycle.)  Experiments also show that people can be receptive to adopting new identities.

3)   fixed mindset versus growth mindset theory – Carol Dweck  developed this theory and determined that you need a growth mindset to implement change.  The growth mindset believes the brain is like a muscle and you can change your situation at any time with enough effort.  The growth mindset accepts big challenges despite the risk of failure.  (Example: Schoolchildren who received training that they can be good at anything, including math, if they just work hard enough achieved far more than children who did not receive this training.)

4)   fundamental attribution error – This theory, developed by Lee Ross, is similar to the fixed mindset theory and explains that sometimes we don’t believe we (or others) can change because of innate, unchangeable personality characteristics.   “The error lies in our inclination to attribute people’s behavior to the way they are rather than to the situation they are in. “ (Example: The speeding driver who just cut you off is not necessarily a thoroughbred jerk but someone running late for an appointment.)

Some of the unique insight about successful change offered by the Heath brothers includes:

1)   look for bright spots – If you are trying to implement a very difficult change, look first for examples of people who live in nearly identical circumstances to you who have achieved the goal.  What did they do that you could replicate? (Example: When working to combat poverty in a poor community, philanthropists first looked to the poor mothers in that community with relatively healthy children and taught those healthy mothers’ dietary techniques to the mothers with more sickly children.)

2)   seek small solutions – “Big problems are rarely solved with commensurately big solutions.  Instead they are most often solved by a sequence of small solutions.. . . If you seek out a solution that is as complex as the problem . . . nothing will change.”  As former UCLA coach John Wooden put it: “When you improve a little each day eventually big things occur . . . Don’t look for the quick big improvement.  Seek the small improvement one day at a time.  That’s the only way it happens – and when it happens it lasts.” (Example: The U.S. government’s food pyramid is cited as an incomprehensible guide for healthy eating that does almost nothing to solve obesity and other problems.  More effective have been specific directives such as asking people to switch from whole milk to 1% milk.)

3)   make change seem easy – “A  business cliché commands us to ‘raise the bar.’  But that’s exactly the wrong instinct if you want to motivate a reluctant Elephant.  You need to lower the bar . . . ‘shrink the change.’”  (Examples: A car wash offering a free wash after 8 washes on a punch card had better success when giving customers a 10-wash punch card pre-punched with 2 washes than an 8 wash card starting from zero.)

4)   focus on changing feelings – “The core of the matter is always about changing the behavior of people, and behavior change happens in highly successful situations mostly by speaking to people’s feelings.”  (Examples: Trying to inspire your employees by focusing on cost reduction or financial goals is much less effective than inspiring them to provide incredible service to their customers or other emotionally connected goals.  Trying to sell to your customer by giving them a PowerPoint presentation with the logical reasons why they should use your product or service is much less effective than walking in with a hands-on tactile display showing you understand their problem and showing them the way to a solution.)

5)   expect failure – “Any new quest, even one that is ultimately successful, is going to involve failure.”  . . . You need to enable the expectation of failure. . . . Even in failure there is success.”  (Example: A famous design firm tells its designers to expect that during the design process there will be ups and downs and that the down periods are not signs of failure but periods the designer must persevere through to generate an excellent design.)

I generally enjoyed reading this book.  It started off very strong and engaging but toward the end in the discussion of making the path easier it started to lose a little steam.  Some of the last suggestions are about making checklists and scheduling tasks—basic time management stuff.  The only other criticism I have of the book is that when you finish it, you feel inspired with all kinds of thoughts but do not have a lot of clarity about exactly what to do next when facing a specific problem. However, if you are willing to sit down and spend some time doing your own thinking, this book is an excellent starting point and a goldmine of ideas about solving truly difficult problems.

Believe it or not, organization is mentioned in the book as a complex problem in need of a solution.  And the FlyLady, a.k.a. Marla Cilley, is cited as an example of effectively using various psychological techniques for optimum motivation in the field of personal organizing.    She is cited as a “shrink the change” follower by advising people to set a timer for 5 minutes to begin to clean up one room the best they can rather than committing to clean the entire thing (which can be daunting).  I also think she is a “quick, small solutions” practitioner as her first commandment is the simple, “shine your sink.”  She then progressively adds tasks like “get dressed to your shoes.”  You could also argue she is an “identity” practitioner as she has her own alter ego and calls her followers “FlyBabies.”

If you want to start applying the Switch philosophy to your own problems, you could start by separating your problem into the three change areas:

2)   Motivation – What would make me excited about making this change?  What thoughts/feelings are derailing my success?  How can I structure the steps toward my goal so that the change seems easier to me?

3)   External – How can I change my environment to make change easier and reversion to my old ways harder?

Can you relate to the Switch elephant/rider approach?  Which techniques/theories appeal to you the most?  Please share in the comments.