The Defining Moment of My Summer 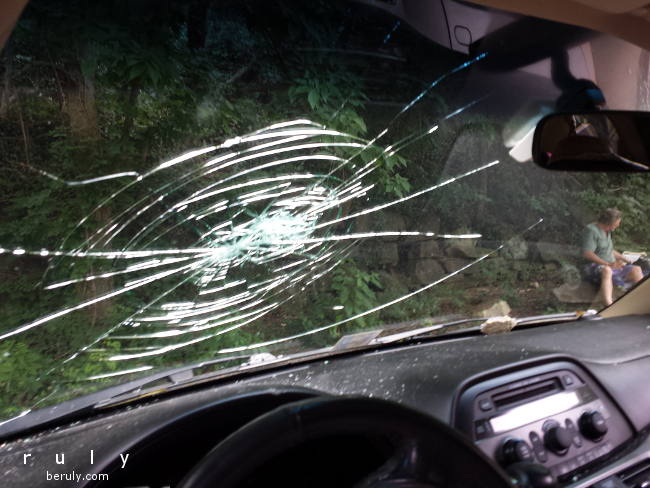 After our hike on the dry rocks, I opened the van door and buckled my son into his car seat, I noticed some blue specks on the car mat. Detritus in the minivan is not that unusual so I didn’t think much about it.

I walked around to the other side of the car to buckle in my other son and then I saw it. 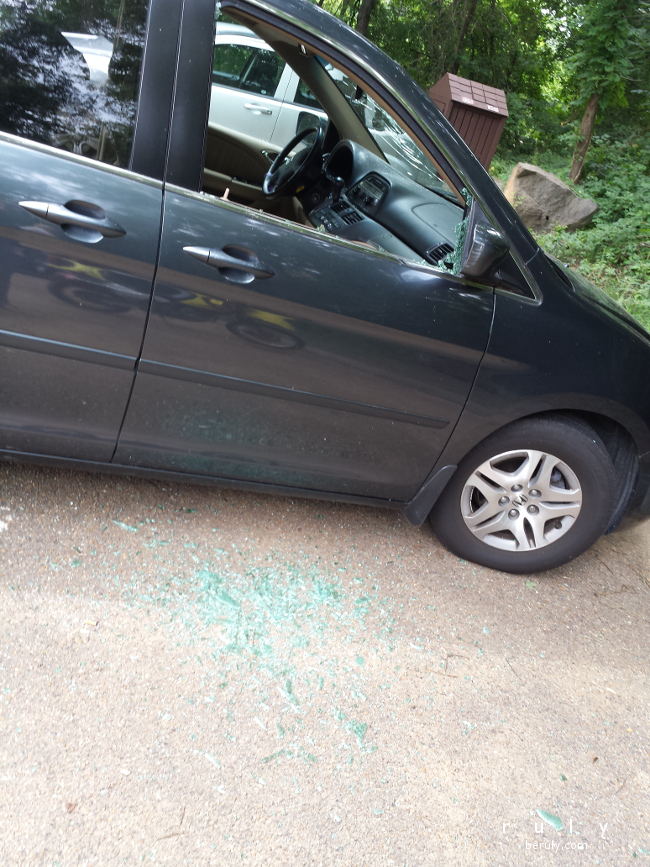 My passenger side window was gone. Tiny shards of glass made a raggedy edge around the frame and a pile of glass was on the pavement. My windshield had a huge spiderweb-like crack right above the steering wheel. It looked so angry. 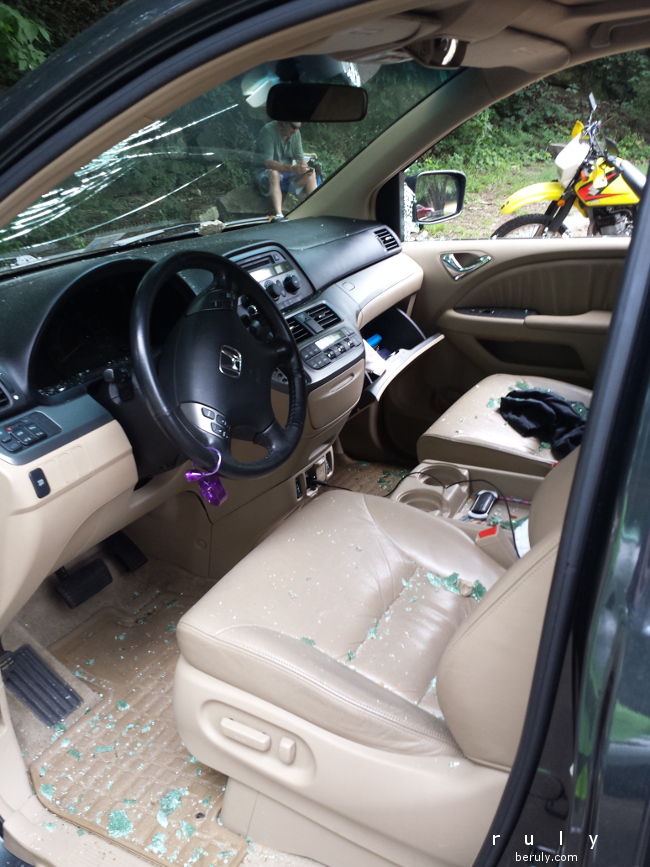 In that moment, I was mostly confused.

How did this happen?

Why did this happen?

I didn’t feel afraid, just more annoyed that it was going to take a lot of work to get out of this mess.

“Was anything taken from the car?” the brusque dispatcher inquired. As I was talking to the dispatcher, an African American woman in the parking lot came up to ask me what happened.

“Ma’am, was anything taken from the car?!?” the dispatcher became more insistent.

I said I couldn’t exactly tell because I was unable to reach in through the glass to check certain areas.

“All right, I’ll send an officer then.”

Car vandalism must be so common in Richmond that the police don’t even respond unless something has been stolen from your vehicle.

I chatted with the woman in the parking lot briefly and then called my husband working at home.

“There is an emergency! We need your help!” were my first words to him.

Once he confirmed that we were all unharmed he sprang into calm action and said he was on his way to get us but that it would be at least an hour with traffic.

The woman in the parking lot began chatting with me again. She said that she used to live just down the street and was visiting from Chicago. She was there with her two children and two of her friend’s children. She asked if someone was coming to help me and I told her my husband would be there in an hour.

“This is not what Richmond is all about.,” she sighed. “I am going to wait with you. In case you need it, here is my phone number. If I still lived here, I would take you to my house to wait.”

I thanked her for the offer, told her it wasn’t necessary and that we would be OK waiting alone.

“Nope. I’m still going to wait with you.” she insisted.

When it comes to survival advantages, some people are strong, some are clever, and some are beautiful or charming. My survival advantage seems to be that I am completely nonthreatening! I don’t seem to scare or intimidate anyone. People want to trust me . . . and it appears help me! I am not sure that I would volunteer to allow any stranger into my home, yet here was this woman offering this to me!

At this point, I got back on the phone to start the first of many phone calls with insurance and towing. My vandal left my car not only damaged but undriveable due to the smash right in the middle of the driver’s viewpoint.

Half an hour passed. She and the children were still there with me waiting.

The police arrived. An African American officer got out of the car. At first, you could tell he was surveying the scene quickly not sure what was going on. In 3 seconds, he took it all in. Glass damage . . minivan . . .white woman . . . preschooler and baby, mom and other kids. You could then see him noticeably relax as though he was saying to himself, “Got it. No immediate danger. Just be the face of safety and reassurance and take a report.”

I asked the officer if I had made a mistake by visiting a “bad” part of town. He said the area wasn’t known to be dangerous. I asked if this looked like bored kids or something more sinister.

“Well, it could be bored kids. We’ve had a couple of these types of incidents in the last few weeks. But it’s also that times are hard. Sometimes your parking change is enough to feed someone who is hungry.”

I thought the officer had quite a humane perspective on crime. He helped me inspect the car and we learned that the parking change (probably the most stealable item in the car) was still there. The glove box had been opened but it wasn’t clear that anything at all had been taken. There was a piece of plastic on the floor beneath the steering wheel that might indicate the vandal was trying to steal the car but nothing to point to for a motive for this theft.

*Later, we figured out that I had a tote bag of library books in the front seat that was taken. It was zippered closed so you couldn’t see what was inside. A toiletries bag containing a toothbrush and feminine supplies was stolen from the glove compartment. Not an impressive haul.*

He took a report, wrote down his contact information (he had taken so many calls that day that he was out of business cards) offered to call a towing service and left.

“I’m sorry this happened to you,” he said.

It began to rain lightly. I again told my friend and her kids that they didn’t need to keep waiting. It could be a while.

My son began to fuss a bit. Her teenage son pulled out his basketball and began to bounce it back and forth with him. The gesture was so touching.

The minutes ticked on. My husband was getting a rental car that took forever to process. He called to arrange delayed pickup for the girls at art camp.

I was constantly on and off the phone with different car repair and insurance companies.

Time ticked slowly on. I still had to wait for a tow truck and my husband. My new friend from the parking lot got on her phone as well.

“I have to leave,” she said. “But don’t worry…..someone else is coming to wait with you. She’s an older woman and she’s bringing snacks and water. She will wait with you until your husband gets here.”

I told her this was too much, that it really wasn’t necessary.

“No,” she insisted. “We are not going to leave you here alone.”

About 15 minutes later a white woman who appeared to be a young grandmother arrived. She hugged my new friend and introduced herself as a friend of a friend. She then hugged me and was especially kind to my two boys.

“I have snacks and water in my car. You can come wait there.”

It began to rain harder. The tow truck arrived. She held my baby and entertained my son with music from a Christian radio station while the tow truck driver helped me unbuckle car seats. 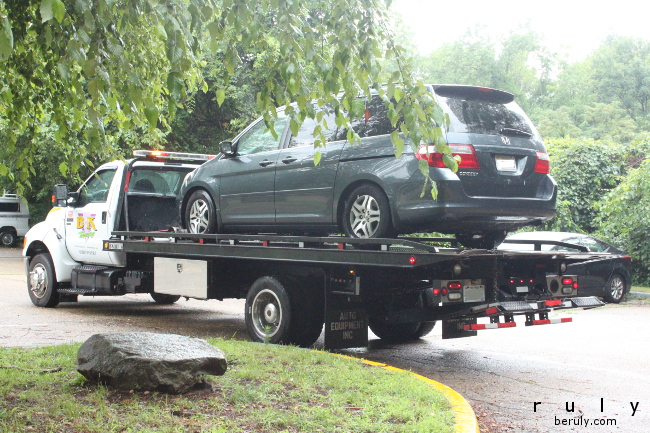 She let us load the car seats into her car. She let me charge my nearly dead cell phone with her car charger. We talked about her grandchildren and how she got the call to help.

“I’m not sure what I’m asking you to do,” the woman who called her had said.

She just knew that she needed to bring food and water. She was going to meet a total stranger in a parking lot and wait.

About two and a half hours after my initial phone call, my husband arrived with the girls. We thanked the woman and loaded up into the rental car.

This whole experience was simply extraordinary to me. One person decided that crime was not OK. While she couldn’t fix what had happened, she was bound and determined to make sure that I didn’t stereotype Richmond as a crime city. She bravely trusted a stranger and did what she could to help. She called in reinforcements who did the same. To this day, I don’t know if I could do what these women did.

We have lived in Virginia for 12 years now and have always felt somewhere in between locals and transplants. This experience was almost like a big welcoming hug from the state saying, “You’re officially one of us now.”

I kept thinking of the Charleston 9 during this experience for some reason. The brave example of those families forgiving even in the face of tremendous personal loss was inspiring. I was so overwhelmed by the undeserved kindness that had been shown to me.

“I’m sorry this happened to you.”

What a powerful phrase. It was very comforting to hear this from people. It was as though people were saying, “You didn’t deserve this.” “It wasn’t your fault.” “We want things to get better for you from here.”

After being the recipient of so much kindness, I can’t help but feel an obligation to pay it forward. But how?

Recently, Virginia has been in the news for a horrible shooting of two young news reporters as well as the indictment of a white police officer in the tragic shooting of an unarmed teenager. Yet, there is no violence in the streets and no noticeable increase in racial tensions.

My experience has taught me to be very careful about using race to define any situation. While I cannot fix either of these situations, I feel a strong obligation to do something to make things better.

For now, I pledge to donate to these victim’s charitable causes and to express remorse. I promise to promote stories of harmony among people (like this one) whenever I encounter them to help put into perspective all the stories of hostility and discord that the news media is sure to promote. I also want to support any effort to get help to mentally ill people with violent tendencies and to improve police training for arresting and subduing suspects.

Any effort any of us can make to promote seeing the best in people could make a huge difference.

The defining moment of my summer was not about violence or crime or some sad story about insurance deductibles and monetary loss. Instead it was an inspiring story about gaining awareness of the personal power we all have to fix seemingly impossible and complex situations.

Did you have a defining moment this summer or this year? Please share in the comments.