What a feast! I spent all day cooking and just about the time many people were probably getting in their cars for some early Black Friday shopping we were sitting down to eat. My 3 year old decided that the proper attire for such a meal was pajamas. Obviously, I still need to work on my timing but our meal was probably the best full Thanksgiving I have ever prepared!

We tried the collard greens and have mixed feelings about them. They are kind of delicious but the chewy texture is a little tough to get used to. They go down best with extra red hot pepper sauce and they were pretty good again today in our Thanksgiving leftovers sandwiches.

I also made Cristeta Comerford’s sweet potato pie. This was kind of a funny experience. For some reason, even though I read through the recipe beforehand, I did not process exactly what would be required to make this pie. Here is a bit of my thought process.

First, I put the “aromatics” on a sheet tray and baked the sweet potatoes. I forgot to buy an orange so I quickly grated the zest off the lemon that I needed for the custard part and cut that up instead. I left them in the oven for about an hour. 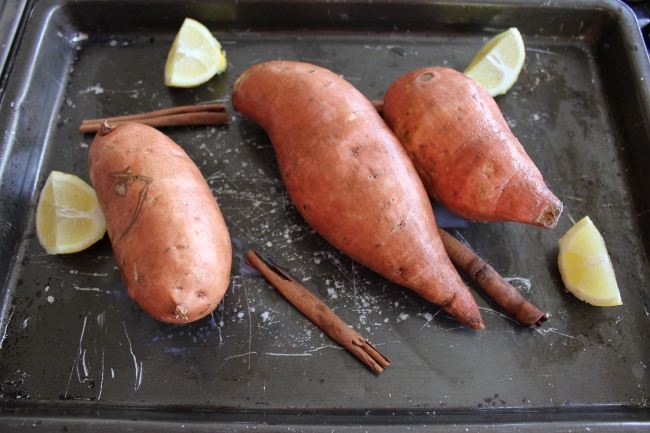 I then worked on the dough which ultimately came together nicely into a ball as the recipe described. 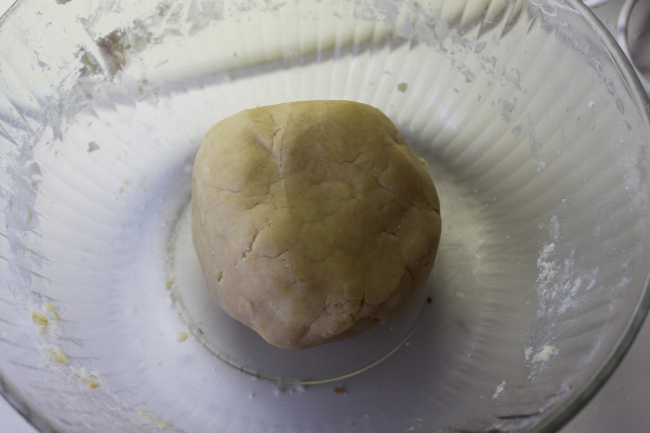 After taking the dough out from its “rest,” I suddenly realized that I would need to roll this out into a real pie crust…something I have NEVER done before. After a few false starts, I finally got it rolled out 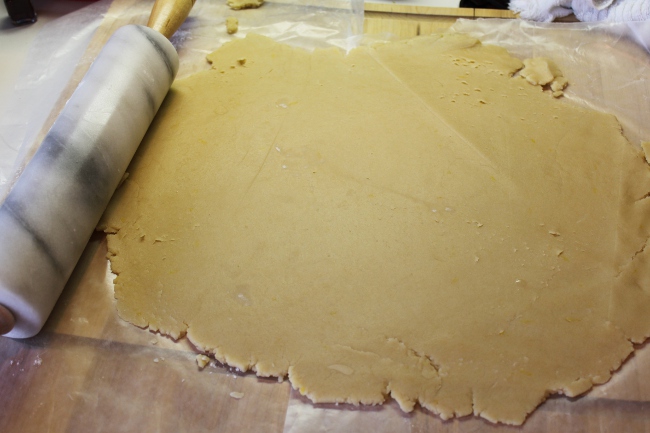 and made a half-decent pie crust. 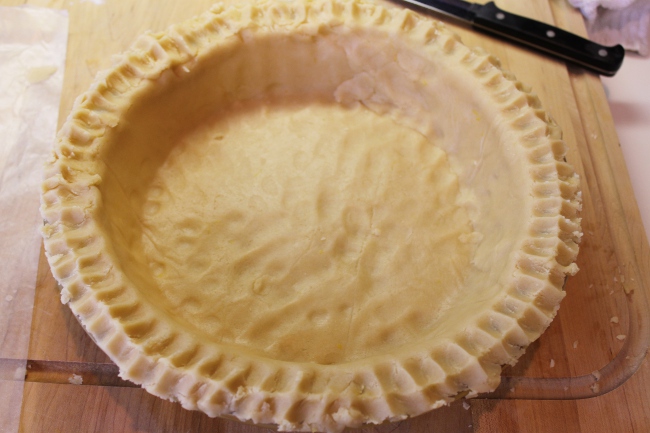 Then the recipe said, “Top with parchment paper and cooking beads and bake blind for 12 minutes.” Small problem . . . we didn’t have parchment paper. I am not sure what cooking beads are and I don’t know what “bake blind” means. Somehow I recalled either a recipe I made years ago (or maybe something I saw on TV) and lined the crust with aluminum foil and put some uncooked rice in to weight it down. 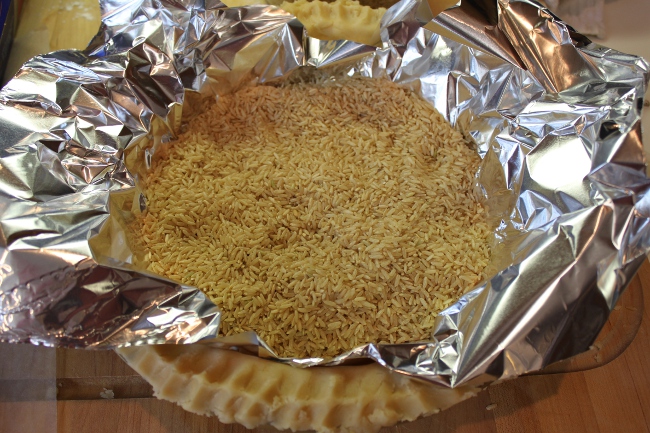 Next it was time to prepare the sweet potato puree. Things were going OK until the recipe said, “Scoop the meat and pass through a chinoise.” What in the world is a chinoise? I scooped out the sweet potato meat and mashed it with a fork. (I thought to use the strainer in the picture below but the meat was too tough to go through.) 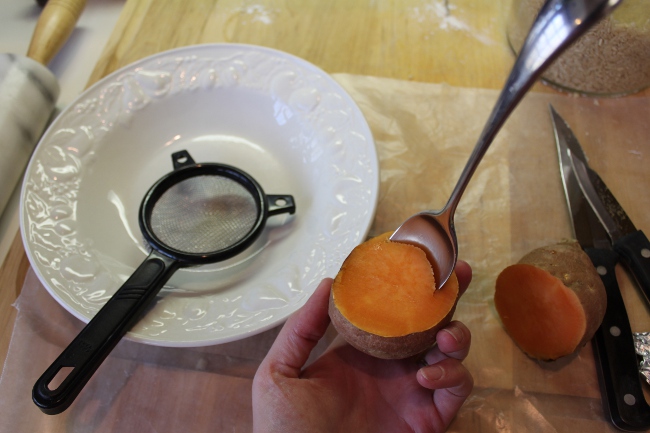 It was still pretty lumpy so I put it in the blender for a bit! The blender couldn’t handle it either so it was back to mashing with a fork again. 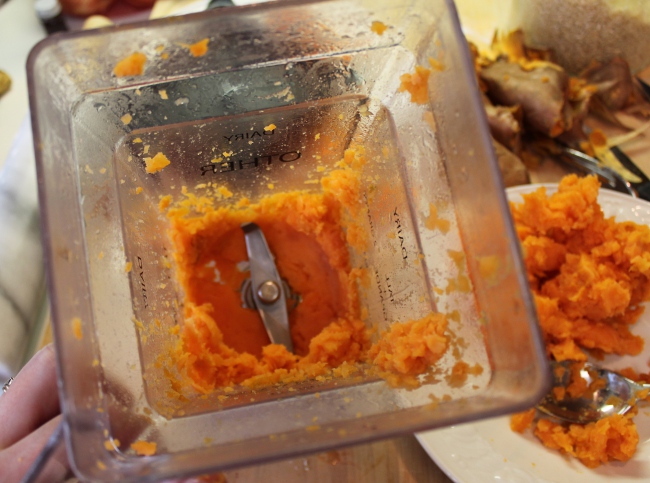 After getting the puree as smooth as I could, I made the custard and added it in. Things were looking pretty good at this point! 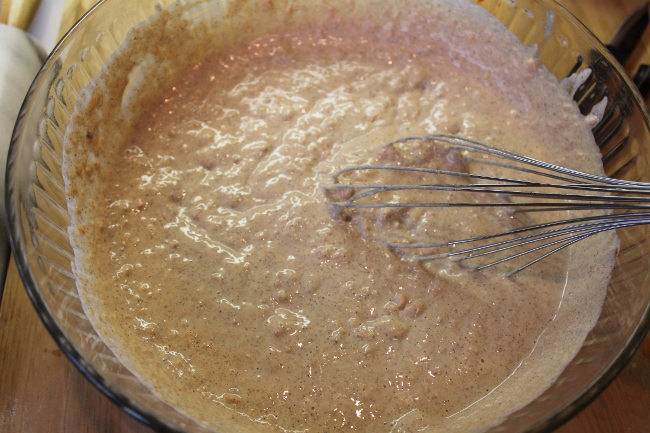 I poured the filling into the crust and put it in the oven. 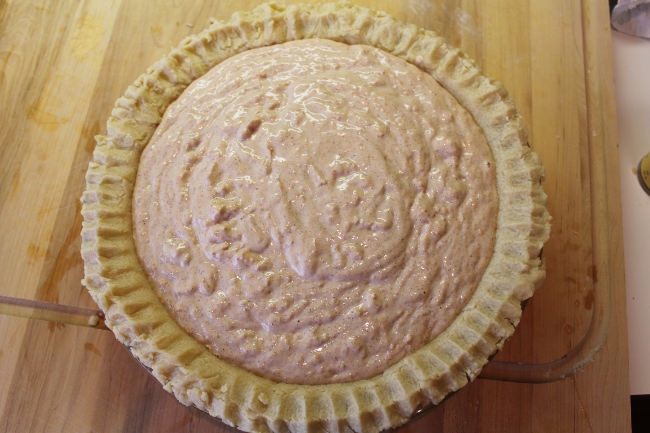 As I was washing up dishes after our meal, I noticed that the tag for my Pyrex pie pan indicated that you should never put glass under the broiler. Small problem for the honey meringue topping for dessert! Rather than risk burning the whole pie and cracking my pie dish, I decided to make the meringue on a metal sheet tray and just scoop it onto the pie.

The honey meringue topping is the very best part of this whole dish. Even if sweet potato pie does not appeal to you, you should try this meringue and have it on ice cream or cake. It is soooooooo good. I whipped the egg whites. 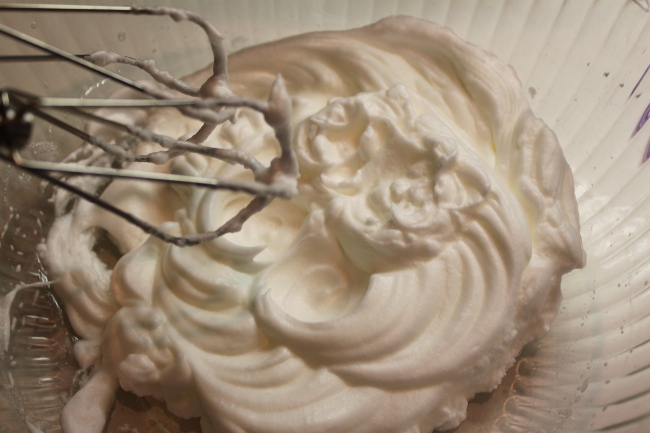 Added the warm honey (which, unfortunately had boiled over on the stove leaving me a honey mess to clean up). 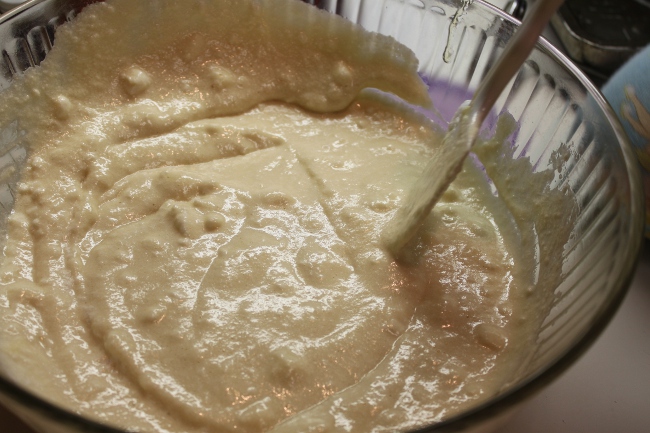 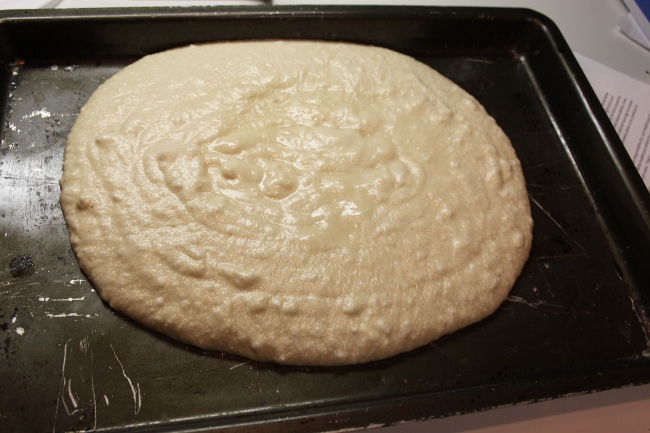 and put it under the broiler for about 30 seconds. It came out nice and brown. 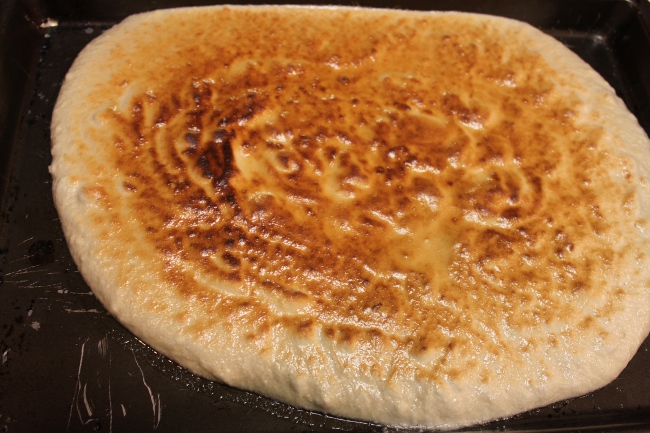 The broiler just browns the top and doesn’t firm the meringue so it doesn’t scoop all that well but you can imagine how good this would be if done properly. 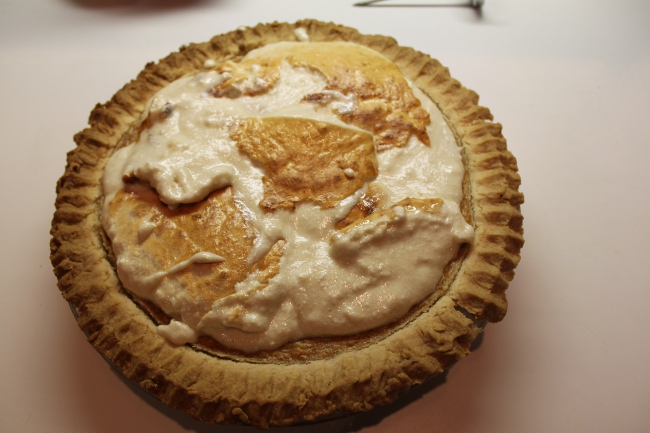 When we cut into the finished pie, it was pretty good! 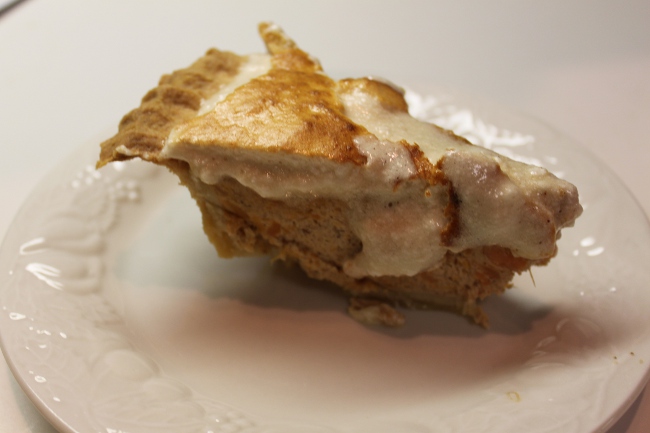 My daughters who liked the mini pumpkin pies I made earlier in the week anxiously wanted a slice. But then they saw that my pie had some chunks of sweet potato in it.

“I don’t like this. It has vegetables in it.” my 3 year old reported.

After this experience, we can conclude two things:

1) Cristeta Comerford is a seriously talented chef. If I can mess up her recipe this badly and it still comes out relatively great, that shows some serious cooking skills. Her flavorings are so subtle, beautiful and unique. The Obamas must eat some elegant food.

2) Before I attempt another recipe of this culinary magnitude, I need to double check for the right cooking utensils as well as ingredients. If you have all of these utensils in your kitchen, you are probably a seriously talented chef as well!

I hope your Thanksgiving cooking (or eating) experience was just as fun and interesting.

Ruly Tip: If you did cook this year, consider taking a moment to write your recipe(s) down as well as any notes about shopping for special ingredients or cooking tools, how long it takes to make, etc. Store your notes and recipes in a special file, binder or type it on a 3×5 card and create a flip-book ring. Not only will this help you next year when you are planning your meal but it is a great way to preserve memories and would make a great gift to a new cook as well.

What were your favorite foods at the Thanksgiving table this year? What other memories do you want to remember? Please share in the comments.